It's the left bank of the Dnipro river and it's the seventeenth century:  the Wild Fields , the last frontier of the unclaimed Ukrainian land where just about anything can happen; it's the territory where witches' covens, servants of dargon Zmiy, demons and spirits of the forests,  fields, rivers and lakes reside and rein. It's a place where the Cossacks come by to the local "schenke" and clerics help a baptized folk fight the sinister darkness that is nearing from the North-East.

The glory of Vassian from Kyiv and his noble deeds reached Vyshnevechchyna, where he was invited to look after untamed magical lands as well as to serve God by a local church,  to educate the its people and fix his best enemy's blunter. The latter would be Fymko, the imp.

What can go wrong if the pious a-soon-to-be priest decides to help a young witch lose her cursed legacy, given that Vassian is himself an heir of a powerful witchers' coven? 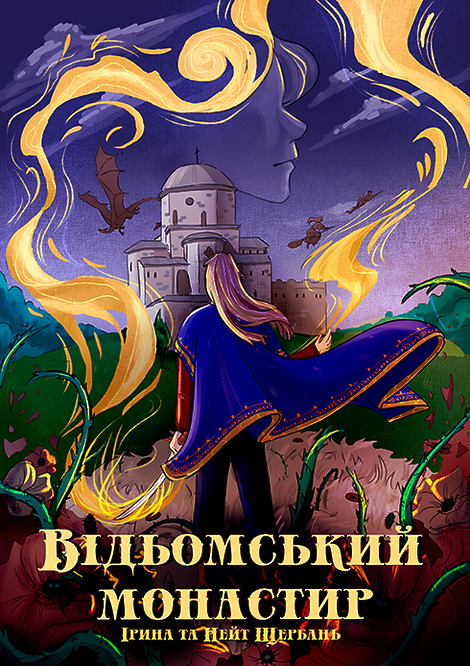 A place for the truth about Ukraine

"Witches' Monastery" was four years in the making, but just like a mischievous kid, it decided to see the light of day with the "best" timing possible: during the greatest war in Europe since the second World War.
The novel was born among screams of countless missile alarm, soul-crushing noise of someone's home falling to dust, mothers' heart-wretching screams and their prematurely gray hair.

It has come to our attention lately that more and more people read books that are carried on some sort of digital device (smartphones, e-readers, tablets etc.) It's comfortable and doesn't require too much space.
You could say that a paperback has its allure and we would agree with you. However, this is our first project that we are literally preparing from scratch and with no help from a publishing house, so of course even a modest run of prints will cost a pretty buck.

Worlds.in.ua is website that belongs to two Ukrainian writers, Iryna and Nate Scherban.

There was quite a debate on what our website should be called, since "Witches' Monastery" is the first but not the only book we plan to publish.

All our stories are connected to Ukraine,  its past, present and even the future! Every single world put in words on the computer screen carries 100% of Ukrainian DNA,  regardless of that world being a part of fantasy, social realism, mysteria, thriller or science fiction genre.